It’s 66 inside so a sweatshirt and pants feel good.  A 6th sailboat is anchored here so it either came in just before dusk and we didn’t notice or came in last night.  Checked the weather forecast and it doesn’t look any better.  Still 20 knot winds and 5-8 foot seas on the outside.  Crepes for breakfast, a sign of comfort!   By evening the sailboat count is up to 11 and weather is looking even worse for the rest of the week.  Bob spent the day finding and removing wires that aren’t connected to anything.  I worked on the aft teak rail which I hope to varnish tomorrow.
Posted by Unknown at 8:41 PM No comments:

Tonight is the planned overnight to Delaware Bay so we were in no hurry to leave but leave we must to avoid another night at $5.50/foot. Getting out was much easier than backing into our assigned slip.  We headed south past Ellis Island and the Statue of Liberty, then through The Narrows.

With a lousy weather outlook we abandoned the overnight idea and Bob selected an anchorage behind Sandy Neck Park where we settled in for the night, and probably the weekend, as the outlook doesn’t look to improve until Monday.  The chart showed clear sailing into the bay but we found a long line of sticks reaching at least 400 yards offshore.  If it had been dark or foggy we would have run right into them.  Note: We should get the spotlight fixed and use it if we ever have to enter a port at night, even if the charts show it to be clear.

We are not alone as 3 of the 5 sailboats tucked in here also look to be cruisers.  We spent the afternoon watching double hull ferries return to New Jersey from New York.  Bob found a warm place to lay on the swim platform which was out of the wind and I took a nap on the couch.  Dinner was chili on sausages with cheese and chopped onions and zucchini on the grill.
Posted by Unknown at 8:36 PM No comments:

Started at 7:30 am for the run through Hell Gate.  Very little boat traffic and the light was perfect for photos.  We shot through riding a 5 knot current and traffic speed was:  Bicycles on shore fastest, K2F second, cars onshore slowest.  We saw the Freedom Tower, UN, Empire State Building and all the others we don’t know the names of.   Not sure what city has the nick name City of Bridges, but New York City should be right up near the top.  Our first time in New York City by boat, and between the bridges and reflective buildings, it was beautiful! 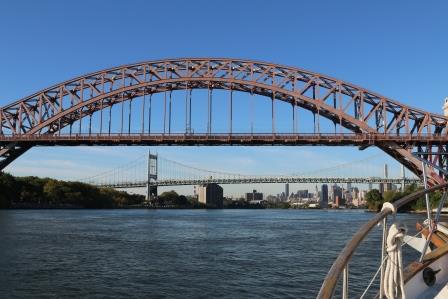 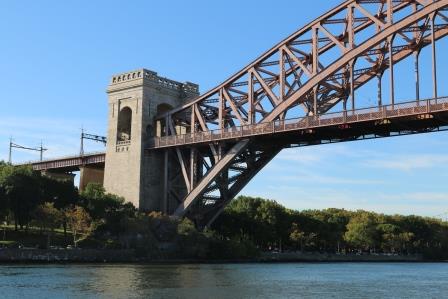 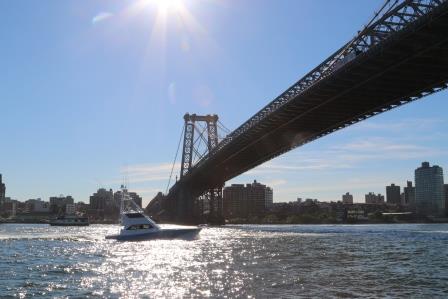 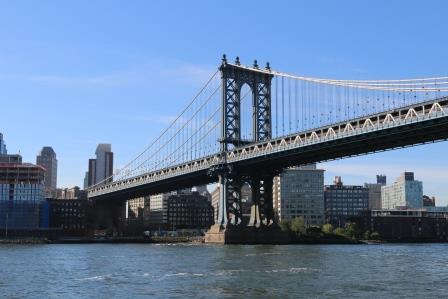 Cutting around the lower end of Manhattan the Statue of Liberty came into view.  Heading north up the Hudson, we took the last available slip at MarineMax Chelsea Pier 59 for $5.50 / foot which does not include bathrooms, showers or electricity, but we are right downtown!  Sliding in between the slips on one side and sunken pilings on the other was hair raising, then hard to port and backing into a slip.  Two dockhands helped out.  Their heartrate increased when we told them we did not have stern thrusters.  Ya, it was a little tight.

This marina is rocky, just like we read in Active Captain comments.  Not comfortable at all but luckily it quieted down for the evening.  I presume it is tide related as the worst time was around 7pm last night and again at 7am the next morning.  We were docked by 10:30am and soon were off to Battery Park on the bicycles.  By the Battery we found a food truck with delectable falafel and gyros to save our grumbling stomachs.  Continuing around to the east side of Manhattan to 21st Street we cut across on narrow streets with bicycle lanes.  Midday desert was a Black & White milkshake at the Shake Shack in Madison Square Park as one of the last customers before they closed for the day.  Continuing on, we returned to K2F in time to shower off and relax for an hour before meeting relatives for a boat tour and heading off to Bleeker Street Pizza for dinner.
Posted by Unknown at 6:48 PM No comments:

Another day dawned clear and blue.  Went up to the office at 8am to return the bathroom key and receive our $20 deposit.  While looking around the store Bob noticed a discontinued VDO Tachometer in their display counter which appeared to be the very one we have on K2F.  He made a quick trip to the boat and returned with the flying bridge tachometer for comparison and sure enough, it appeared to be a close enough fit.  They sold the $300 (in its day) obsolete piece of equipment to us for $60 so Bob was thrilled.

Back on K2F we backed out of our slip and continued our journey west in Long Island Sound.  A pretty straight run for 6 hours placed us in Little Neck Bay and a free anchorage location.  We didn’t have the anchor in for 10 minutes before Bob was in the water and then he asked me to retrieve his mask, fins and snorkel!  He did use his time wisely by scrubbing off the upper few feet of boat bottom.


When he was about half finished a sailboat stopped by to say hi and ask where we were headed.  A local, he gave us some suggestions for staying in a marina in the city so we can catch the subway.  Awesomely nice warm, tranquil day in the middle of the bay with no one around and watching all the busy traffic on shore while sunning on the foredeck to dry.

Red sky in morning! Better listen to the weather report.  Solid overcast but the cloud cover is still high.  As the morning wore on, so did the red sky.  A little overcast but smooth seas and dry with darker clouds to the south and east.  We left at 7:45 headed for Stratford, CT hoping for Thursday at City Island.


Arriving in Stratford, slips only, we had a pump out and were into a slip by 3:00pm.  We walked to West Marine and on the way stopped at Danny’s Drive In, established in 1935 and under their current ownership since 1985.  Bob ordered a pulled pork sandwich and I had the greasiest hamburger (Crazy Horse Burger) ever with dripping cheese and jalapenos.  Tasted great!  They also had black and whites on their shake menu and knew how to make them!  Danny’s Drive In is an icon not to be missed.  You can read an article about them in February 2013, USAA Today.  Back home we got showers at the marina and settled in.  Pope Frances will be in NYC Wednesday through Friday and we hope that doesn’t affect our travel through New York City.
Posted by Unknown at 6:38 PM No comments:

About Bob and Peggy