Enchantment of the Sea cruise ship was coming in as we were leaving.  A Disney cruise ship was already in port and the Carnival ship that was here yesterday was gone.  There are clouds on the horizon and the seas are fairly calm but we need to get inside the ICW before weather picks up tomorrow.  There is a lock between Port Canaveral and the ICW, and it is closed for repair!  There fore, and the weather supports it, out we head for the deep blue sea.

We are on the lookout for wine!  Last week the weather was rough enough that a container ship lost 24 containers somewhere between Port Canaveral and Ft. Pierce.  So far coffee has been found on the beach but the cans are contaminated with seawater.  Cases of wine have been washing up on the beach next and rumor has it, they are intact.  Maybe we’ll get lucky!  Dolphins to starboard!

Pulled in to Ft. Pierce and dropped anchor.  We almost ran into a shoal area but Tim (another trawler snowbird) in an inflatable warned us off.  There is a wide expanse of water here but only a small part of it is deep enough for us.  It is good holding in mud and the anchor stuck fast right away.  We put out 80 feet of chain even though it was only 10 feet deep at low tide and we only expect it to raise 2 feet at high tide.  No one else is here and we don’t swing much with chain.

There is a nice looking island close by that begs for exploring but we are too lazy to put in the dinghy.  Plus….do they have poisonous snakes here?  I “re-began” my exercise program and Bob his banjo practicing.

There are lots of colored lights around this bay, green and red, yellow and white, blinkies and solid, a bridge of lights and a lot of plane traffic.  Everything is at a distance so rather than be a bother it is more like looking at a long skinny Christmas Tree!
Posted by Unknown at 7:39 PM No comments:


We took a slip at Ocean Club Marina, caught up on weather, emails and phone calls for future stops as the weather is picking up again for the weekend.  Weather drives everything.

Jeff and Riema Elder, Bob’s cousin, stopped in for a visit and took us to dinner at the Sunset Grill and a Publix grocery store.  Back at the boat Dyanna and Nathan, friends from Peggy's, work came by.  It’s nice to have visitors!    Sort of cool, but none of our friends or relatives think we are nuts for doing this.
Posted by Unknown at 7:32 PM No comments:


Have you ever tried to make scrambled eggs in the microwave?  Bob did it!  He scrambled two eggs with sausage and muenster cheese and it tasted great!  A lazy day, we took turns taking naps so we could stay up for tonight’s 3 hour watches.

I’m far enough south!  At 4pm it was 82 in the pilot house with the sun shining in the open starboard door, and I am HOT!  There were more dolphins this morning and for a while this afternoon the sea was like glass.  The only company out here were a few shrimpers this morning and sailboat this afternoon going the same direction farther out to sea.
Posted by Unknown at 7:29 PM No comments:

After a tasty and filling breakfast of omelets, bread pudding, sausage, and juice on the KK42 Forever Exploring we headed out of Charleston Harbor midday for a run down the Atlantic instead of the ICW with a goal of arriving at Ocean Petroleum for fuel fill up in the morning.  Since we were in the ocean it was a two hour side stop to get there and after arriving were told that they were out of fuel.  The refill truck was late and would not be there until this afternoon.  The next marina was filling a 2,000 gallon yacht so had no space for us for several hours. 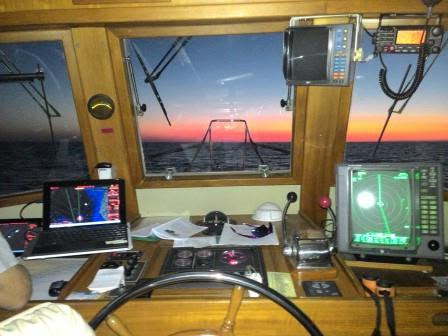 As we travel along, people ask us where we are going.  I tell them we are going to the Bahamas for Christmas.   Peggy just looks at me, while doing some mental math.  In the ICW, we do about 50 miles a day, and that would put us down to Miami some time around Christmas time, obviously not in the Bahamas.  Meanwhile, Peggy is getting good at using all the weather apps.  There is a 5 day weather window coming up where the wind is not out of the north, and calms seas, and low wind.  To get to Bimini before Christmas, we would need to do about 4 over nighters requiring good weather.  Guess what!  The next 5 days were forecast to be just what we needed!

With the weather on the outside being so calm we decided to take advantage of it and shoved off to Cape Canaveral. At sunset we both saw the “green flash”!   The stars are much more clear offshore but I was surprised to not be able to see the milky way.

Posted by Unknown at 7:14 PM No comments:

About Bob and Peggy